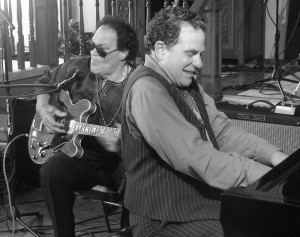 Marin County vocalist and boogie-woogie piano pumper Mitch Woods sure knows how to put lyrics across, especially on songs about cars such as his original “Solid Gold Cadillac,” the 1951 Jackie Brenston-Ike Turner hit “Rocket 88” and “I Gotta New Car,” an obscure 1953 tune by bluesman Ervin “Big Boy” Groves.

“What little money I runs across, goes in my gas tank and out my exhaust,” he belts out on the latter number over the stop-time groove of his four-man band, the Rocket 88s, during a show at Fenix, a new supper club in downtown San Rafael. “Next time I buy a car,” he adds, “I’m gonna get one I can afford … and I mean a Ford.”

The capacity crowd ate it up. Woods, who is wearing a double-breasted lavender suit he had custom-made some years ago when he was performing at an Italian restaurant in Hong Kong, isn’t sure if the Turkish audience at the beer company-sponsored Efes Blues Festival, at which he appeared in October 2011, picked up on the song’s English-language wordplay. It’s one of 14 tracks on his current CD/DVD, “Blues Beyond Borders: Live in Istanbul,” including a version of Professor Longhair’s “In the Night” on which he and the band interpolated the popular Turkish song “Lambaya Pu De.” (It translates “Say puff to the lamp.”) He does remember, however, that he got many in attendance to sing along on the repeated line “I gotta new car.”

“A lot of songs I don’t do, like my song ‘Broke,’ ” the pianist explains earlier in the day at his hillside home in Marin City about his increasingly frequent engagements outside the United States. “It’s a funny song, but you really have to know English to get it.”

Woods, who spends much of his time touring, is at home for a month or so trying to line up gigs for the summer. He already has one in June, playing for swing dancers at Lincoln Center’s annual Midsummer Night Swing outdoor event in New York. Before he hits the road again, there are a couple of San Francisco engagements: Saturday at the Chapel and April 3 at Biscuits & Blues, where he will celebrate his 62nd birthday.

Over the past dozen years, Woods has seen one American blues club after another at which he once performed go out of business.

“I believe it goes in cycles,” he says. “I’ve seen blues die and come back, but it’s been a long time since the last cycle. The blues audience is getting older, and it’s not being replaced by a younger audience.

“There are not so many blues clubs, but blues festivals are everywhere,” adds the Brooklyn-born musician. “That’s a big part of my living. I’ve been e-mailing and on the phone with every festival that I can connect with. I’m talking to festivals in Maine and Rhode Island and Washington and Canada, Norway, Switzerland and everywhere. They are everywhere, and they are successful. People love festivals, and I love playing them.”

Woods makes himself available to promoters as a single who can work with a pickup band from wherever he’s booked or will bring all or part of his own Rocket 88s. The edition of his band that appeared in 2011 in Turkey, for instance, consisted of drummer Larry Vann and guitarist Adam Gabriel, both from the Bay Area, and, from New Orleans, bassist Cornell Williams and onetime Allen Toussaint saxophonist Amadee Castenell.

“What I do is mix and match,” he says. “I bring some of my really great players from here and maybe use rhythm sections from there. I have some really good guys in France, and I have a whole band in Italy – the Red Wagons, a great jump band.

“It depends on the budget. Europe’s now going through an economic crisis, so they’re all concerned about costs. If you bring a five-piece American band to Europe, you’re going to be spending $7,500 just for airfare.”

The pianist played his first overseas engagement in Italy in 1987 as part of a tour organized by San Francisco Blues Festival producer Tom Mazzolini. Woods has been back to Europe countless times since. He also has performed in Thailand several times and once turned down an offer from a jazz club in Shanghai because he didn’t want to commit to a three-month contract.

Woods appeared last year in Paris, Athens, Bali and Israel, among other places. He’d been invited to Israel to play a birthday party by a fan he’d met on the Legendary Rhythm & Blues Cruise, a weeklong Caribbean excursion on which he has performed every year for the past decade. Fellow cruise performers such as Taj Mahal, James Cotton and Matt Murphy have dropped by to sit in on his nightly solo piano bar sets that run from 1:30 a.m. till dawn. While he was in Israel, the U.S. Embassy in Tel Aviv helped him arrange to give a series of master classes at universities and music schools.

“I did one with an Arab-Jewish choir,” he recalls. “They sang in Arabic, Hebrew and English. They were teenagers, I guess 14 to 15 years old. I got them to sing ‘Shake, Rattle and Roll.’ It’s on YouTube.”

“They’re doing wonderful work trying to get these kids to play music,” Woods says of the Arab/Jewish music school. “It really helps promote peace. That’s why I call my new project ‘Blues beyond Borders.’ As musicians, we’ve been able to cross all these boundaries that are set up – political, religious – with music. People love American music. I would say it’s our best export. No matter what they think about America, they love our music, and there are reasons for that.”