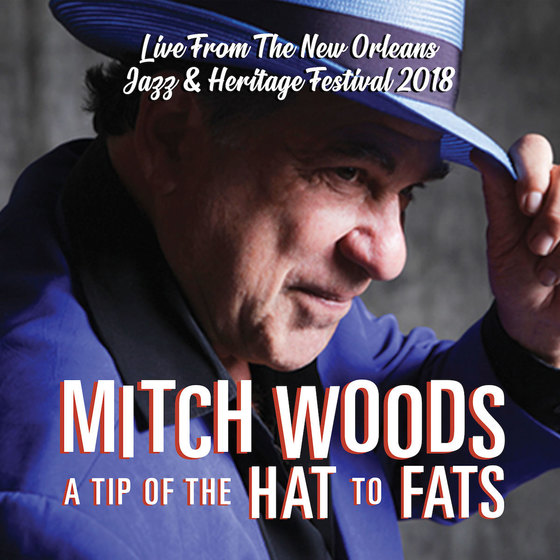 Recorded live at the Crescent City’s famed Jazz & Heritage Festival, A Tip of the Hat to Fats showcases the masterful pianist and entertainer in his element — onstage and in command of a wealth of styles,  from jump swing to blues, boogie-woogie to primal rock ’n’ roll. 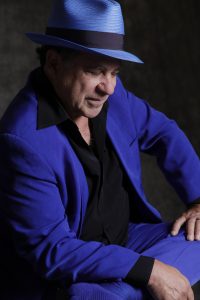 NEW ORLEANS, La. — Mitch Woods’ new album is called A Tip of the Hat to Fats, but it’s far more than a tribute to the late rock ’n’ roll granddaddy Fats Domino. With a wide embrace of styles, high-flying performances, and a song list that also includes Professor Longhair, Wynonie Harris, Jackie Brenston and Woods himself, these nine tunes — each with a buoyant introduction by the singer, pianist and bandleader — perfectly spotlight his upbeat virtuosity. The album will be released by Blind Pig Records via The Orchard on April 19, 2019.

“I’m an entertainer, and there’s nowhere I’d rather be than at a festival playing and singing the music I love and making people happy,” Woods relates. “Onstage is where I flourish. The music I love and the songs I write in the spirit of that music domake people dance and laugh. It all comes from the era of the late 1940s through the early ’50s — a soundtrack of jump swing, blues, New Orleans music and early rock ’n’ roll, and I love to go right to the roots of it.”

For Woods, those roots extend to his childhood in New York City, when he first heard boogie-woogie piano and fell for the sound and the instrument. And they’re delightfully exposed in A Tip of the Hat to Fats, which captures a percolating live performance at the 2018 New Orleans Jazz & Heritage Festival. The Crescent City holds a special place in Woods’ heart, and since his first trip there in 1981, the sounds that still resonate in the Big Easy’s boulevards and bar rooms — from the echoes of foundational artists like Domino and Fess that linger in today’s music to the daily parade of brass bands and Mardi Gras krewes that fill the streets — have become an important part of his musical evolution.

Those sounds drive the album’s version of one of Woods’ most popular tunes, “Mojo Mambo,” like a V-8 Caddy on a racetrack. He turns the song into a hip-swiveling invocation by putting his spin on one of Professor Longhair’s patented melody-and-rhythm riffs with authority and taste. And his handpicked band of veteran New Orleans musicians is the perfect ensemble to support him here and on the rest of the album. The group includes baritone saxist Roger Lewis of the Dirty Dozen Brass Band, Allen Toussaint sidemen Amadee Castenell and Brian “Breeze” Cayolle on tenor saxes, Jon Cleary, bassist Cornell Williams, Dr. John guitarist John Fohl, and Tab Benoit and Ani DiFranco drummer Terence Higgins. He’s also taken a version of this band around the world, playing festivals under the name Mitch Woods’ Big Easy Boogie.

Together, Woods and his krewe take this concert recording through a series of musical apexes, including a pair of tunes associated with Domino: “Blue Monday,” written by classic-Domino-singles producer and New Orleans legendDave Bartholomew, and the Fats-penned “Walking to New Orleans.” Woods handles both numbers with soul and swagger, gently swinging while he propels the arrangements with his left hand, turning back time to the earliest days of rock ’n’ roll — when the piano and the horn, not the guitar, were the style’s main instrumental voices.

With the final track on A Tip of the Hat to Fats, “The House of Blue Lights,” he turns the clock back even further — to 1946, when the number was first cut by jump-swing singer Ella Mae Morse, and to the very roots of boogie-woogie piano. But as with all of his performances, Woods brings his own joyous energy to the fore in his playful asides and brightly chiming improvisations on the ivories.

In a sense, A Tip of the Hat to Fats iss a sequel to two of Woods’ earlier releases: 2010’s Gumbo Blues and 2008’s DVD/CD package Big Easy Boogie. The former was a tribute to the legendary New Orleans blues and soul shouterSmiley Lewis, and includes Lewis’ biggest hit “I Hear You Knockin’” and well as a studio version of “Blue Monday.” And Big Easy Boogie was a dream project for Woods, who enlisted Bartholomew as producer and drafted original Fats Domino band members Herb Hardesty on sax and Earl Palmer on drums. Woods also commissioned a film of the historic sessions and a subsequent concert featuring the album’s players at the 2002 Jazz & Heritage Festival. Altogether, the globetrotting Woods has played the event five times and considers it his favorite festival. The 2018JazzFest, as the annual series of concerts is known, was in part a tribute to Domino, who had died five months before.

It’s been 35 years since Woods made his debut album, Steady Date, which also appeared on the Blind Pig label. By then he was already a popular, hard-touring artist on the blues circuit, building a repertoire of his own songs as well as classics borrowed from the masters who fueled his musical passions.

Ever since the NYC-born Woods heard his African-American building superintendent’s cousin slam the keys boogie-woogie style, when he was just eight years old, he has chased the music like a dog after a rabbit. His stepfather bought him a piano and Woods began taking classical lessons at 11, and in his mid-teens he was assembling bands to play Greenwich Village clubs. While at the University of Buffalo, he met older musicians at jam sessions who turned him on to recordings of Meade Lux Lewis, Albert Ammons, Pete Johnson and other boogie and swing pioneers.

Woods moved to San Francisco in 1970 and was soon opening for Charlie Musselwhite, the Fabulous Thunderbirds, and other well-established headliners. In nearby Oakland, he attended a performance by the godfather of jump blues, Louis Jordan. That night’s show and Woods’ subsequent appetite for Jordan’s music opened the rich vein of humor that runs through his songwriting.

In 1987, Woods embarked on his first major European tour. Since then, he has made a dozen albums and traveled ceaselessly. He’s been nominated for four Blues Music Awards: three times for Pinetop Perkins Piano Player of the Year, while 2017’s Friends Along the Way was nominated in the Best Acoustic Album category.

Friends Along the Way is a superbly entertaining and intimate collection of duet and trio performances with a guest list of blues and soul who’s who, including Van Morrison, John Lee Hooker, Taj Mahal, Elvin Bishop, Musselwhite, Ruthie Foster, and Maria Muldaur. Woods is also a favorite entertainer on the Legendary Rhythm & Blues Cruise, holding court in the piano bar, where he’s known for showing up in his pajamas and staying at the keyboard till dawn. He is also a member of the Voice of the Wetlands All-Stars, a musical component of Tab Benoit’s organization that promotes awareness of the need for coastal wetlands preservation.

Today, Woods splits his residence between San Francisco and New Orleans, but his real home remains the stage. “What I truly love doing most right now is touring the world playing festivals,” he declares. “I’m playing more festivals than ever before, and it’s perfect. People are there to have a good time and I get to make them happy — singing, telling stories and exploring the piano in every style of the blues that I love. What could be more fun?”